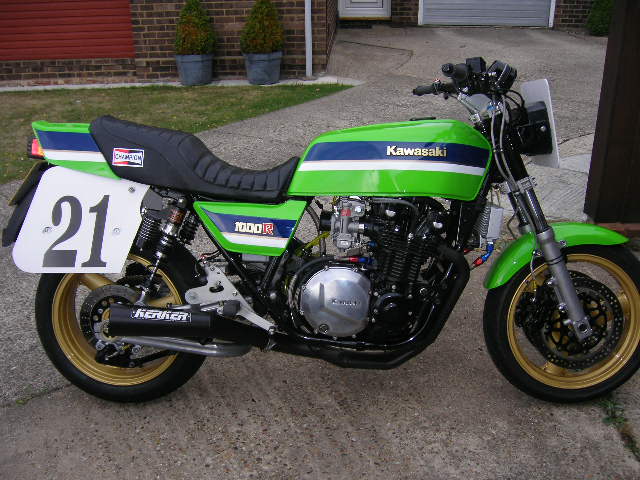 Robin Weed from the z1ownersclub in the UK.

I have always liked Eddie Lawson Reps, since I first saw them in the 1980’s,

but chose to ride the newer models such as the GPX 750R and the GPZ 750 Unitrack.

what to spend it when I saw Kipkawa’s ELR in the Classic Motorcycle Mechanics Magazine.

I could use for the Dream.

The lower frame tube near the side stand mount was rotten,

so after a lot of ringing around I got another frame of John Browse.

I managed to get a front and rear end of a ZRX 1200, which I loosely fitted to the frame.

The yokes were made out of solid alloy billet by a guy of the RDLC Forum,

who did a brilliant job, only having a few photos and my ramblings to go on.

I ordered the rear shocks from Works Performance and Kerker exhaust from America,

all excited, as it started looking like a bike. I wanted to get the number boards the

same as the original, so after months of research, 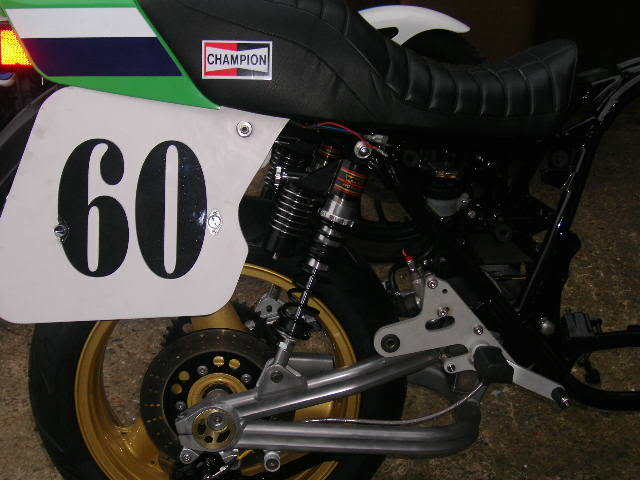 I found that Alan at Kipkawa had

started making the complete seat unit. After a short wait it turned up in the post and

wouldn‘t fit, Alan explained I would have to cut the rear seat tubes off. Panic,

but after a soothing chat from Alan, off they came.

At the same time, I ordered the oil cooler kit from him and found that I would have

to weld brackets to the frame. So with all the brackets welded on (thanks Brian),

the frame went back to the powder coaters again. I still hadn’t got an engine,

but after a chat with Jack, he said he would build one for me. Subsequently,

Jack could not do it, so I got the engine off him, and built it myself, 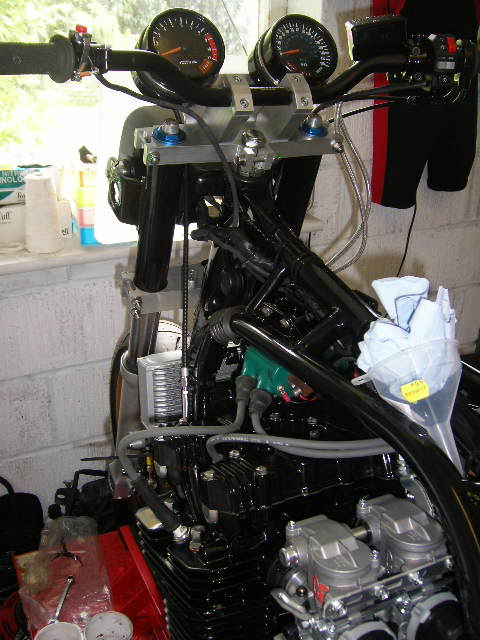 I have a background in Aviation and mechanical engineering,

so it all went together reasonably easily with some technical help from the Z1OC.

It now had an 1170 Wiseco kit fitted and was looking great after being powder coated satin black.

I ordered my carbs (Khehin CRS 33mm) from Allens, but due to the new regs for the Manx,

it took a while for me to get them, as the likes of Guy Martin wanted them as well.

With the help of a mate, I finally got the engine fitted and become even more excited as I

could see the project finally coming to fruition.

The paint work was sent away to get painted, but due to problems with a leaky tank it took

3 months before I saw the parts back again, which was just in time for summer.

Due to the tank problems, Hutch did not want to put the decals on, so I rode 500 miles

with it looking unfinished, but it gave me the chance to have a good shake down run.

The paintwork went back north to be finished off, which needed to be completed in time

for a bike show in October. The people who were doing the decals cocked up, so Hutch

had to paint the lines etc and I picked all the parts up the day before the show.

The bike has run pretty well, apart from a couple of carb blockages from me forgetting

to put the fuel filter back on. It is now laid up for the winter with a gas flowed 8 plug head

and a twin fuel tap tank in the pipeline to be fitted.

In the end, the only things used from the original bike were the tank, side panels,

I would like to thank all those people who have helped me get the bike built, as without

you it would have taken considerably longer and especially my wife,

who put up with me spending stacks of money and hundreds of hours in the garage.

We will be featuring a different bike each month on kz1000r.com
that we feel is deserving of the title "Bike of The Month."

Check back often to see what our pick is.

To nominate or submit your own bike for "Bike of The Month."
Send some info on yourself your bike and loads of pic's bigger the better.

PLEASE SEND IN YOUR INFO IF YOU ARE LUCKY ENOUGH TO OWN ONE OF THESE BIKES!

I really want to bring THIS Registry up to date so accurate number's left in circulation can be made available,

this will intern help us get a true market value for insurance purposes.

Please include the chassis number and the month of production printed on the headstock of your bike.

Your name and location. and most importantly a picture's of your bike.

E-mail me at: This email address is being protected from spambots. You need JavaScript enabled to view it.