Smack dab in the middle of the twisty-turney scenic countryside of central Massachusetts on Sunday SEPT. 12th was Rice – O – Rama,

What started as a little get together has quickly grown into can't-miss motorcycle event.

Not just a swap meet, there's a real bike show, now with 20 classes,

all for vintage and custom Japanese motorcycles.

There is a "Best Foreign" class for vintage non-Japanese bikes too,

This was their 4th YR and apart from the fact the sun didn’t shine it went pretty well.

The meet was of modest size with plenty to look at, bike’s and part’s galore,

and there were some amazing bikes on show.

There was no trouble, no rowdy behavior but what did you expect from a bunch of aging

I had decided to make this event no matter what, for several reasons.

and possibly off load a few unwanted parts they had both gathered over the yrs,

the first time some kz1000r.com members and their bikes.

and was determined to get there, with a slow puncture on my truck we boarded the ferry

and headed off island towards the event,

After disembarking and a brief stop for coffee and croissant,

we filled the truck with gas and headed north to central mass.

I opted to relinquish the responsibility of driver and let Julie drive,

as she knew the area from her college days.

at Daytona, dale Earnhardt Jr is behind us and he is trying to pass and she wants to win the race.

“and its Julie gales folks leading the last lap at Daytona international speedway,

dale Earnhardt Jr is on her bumper will he be able to pass this rookie or is she gonna win folks!”

and hopefully in one piece.

In no time at all we were in central mass, and pulling into Rice – O – Rama, (she won the race!) 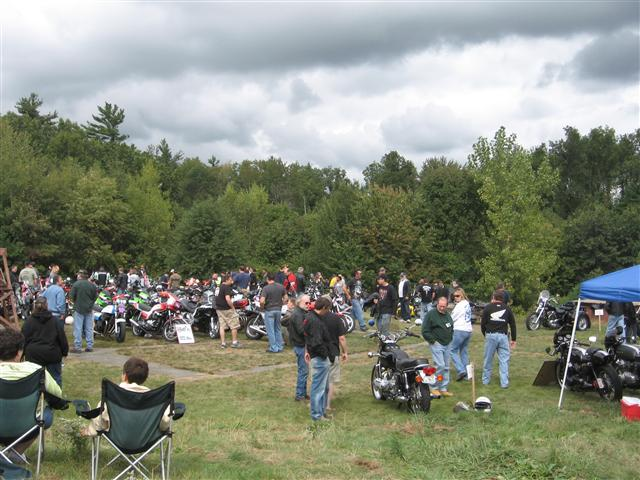 With probably a thousand ppl in attendance

it was a good gathering with loads of stall of used parts looking for new owners.

We parked up; I gave my wallet to my wife so as not to be tempted to purchase anything,

and a z1-r separating them,

after a quick inspection of the bikes we pushed on to find the boys.

Heading towards the back of the field looking in the distance for steph’s and jay’s stall,

out of nowhere was steph, with a beaming smile’s of someone happy to see a old friends for

the first time over our face’s we shook hands,

hugged and I made the introductions to Julie and Kayleigh,

then we headed towards jay’s stall.

Once there more introductions were made beer was handed out and the socializing began.

Steph, jay, Darrel (svrida) and I chatted for a while,

one had a r1 and a r2 the other was restoring a r2 both were encouraged to join the site.

At one point on our rounds leaving Julie to watch the stalls while we walked around the field.

Steph was confronted by a fan of peter Frampton,

who was convinced steph was him, which amused jay and I no end.

Jay got the guys details and we promised to send back stage tickets for the next gig,

camping and a band which would have made it perfect.

managed to collect from sales of a few items jay had brought to sell,

“oh and a guy will be by to pick up your Lawson in half a hr” but it didn’t happen.

We chilled out had a beer and enjoyed the cool fall afternoon which went by all too quickly,

we have seen in North America.

After packing up everything that didn’t sell,

for a bite to eat, once there chatted some more, ate and had a beer.

While my daughter finished her meal I checked my puncture it was worse,

so i decided to swap it out with the spare for the race home.

and snapped a few shots of me changing it lol, funny guys.

we could do it all over again.

The meeting of 3 friends from 3 different countries,
Who all spoke different languages,
But all with the same passion for the Eddie Lawson Replica’s..

I would like to thank joce for the parts,
steph for bringing them down,
and jay for inspiring us to arrange the gathering to make the exchange possible.